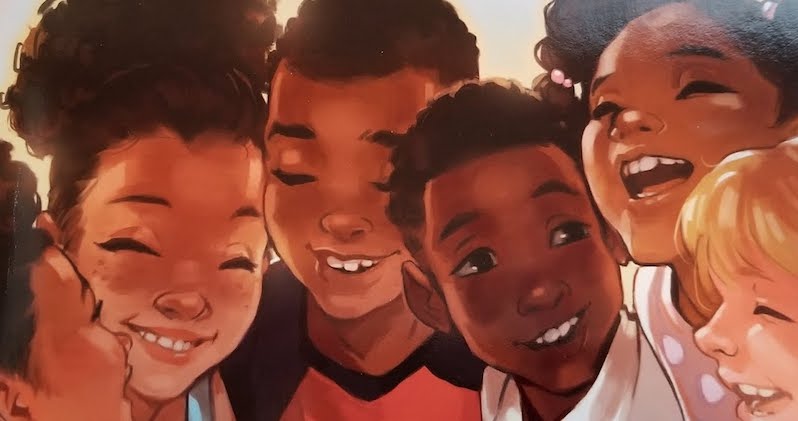 The BLM movement is inspiring a boom in diverse children’s literature.

Illustration by Bea Jackson. From Skin Like Mine (2016) by Latishia M. Perry

When a friend of mine, a former teacher, told me the subject of a children’s book he wants to write—an allegory about how the criminal justice system tries to entrap people of color from a young age—my first thought was Dark, man. And then: I wish I’d had access to a book like that when I was a third-grader.
Last month, the Wisconsin-based Cooperative Children’s Book Center released its annual report about the number of US children’s and YA books by or about BIPOC (Black, Indigenous, and People of Color). Of 3,700 books in 2019, roughly 12 percent were about Black/African characters (the most represented minority group).

The author of the report put it another way: “Taken together, books about white children, talking bears, trucks, monsters, potatoes, etc. represent nearly three quarters (71%) of children’s and young adult books published in 2019.”
Despite the sobering numbers, the resurgence of the Black Lives Matter movement this year has ignited a new wave of interest in books that document the experiences of racial minorities in the US.
One of the more prominent examples is social justice entrepreneur Meena Harris’ beautifully illustrated book, Kamala and Maya’s Big Idea, based on the childhoods of two Black women in the author’s life: her mother, Maya, and aunt, US Senator Kamala Harris.
Harris’ book was published one week after George Floyd’s death. The protests that followed kickstarted a summer of reckoning within the publishing industry and initiatives to promote diversity on the page and beyond.

In Portland, prior to the pandemic and protests, the Beautiful Blackbird Children’s Book Festival was intended to be a block party affair featuring readings and performances to honor Black heritage. The protests encouraged the event organizers to double down on their commitment.
Daniel Minter, a co-founder of the arts alliance that sponsors the festival, told The Press Herald, “Through the festival, we hope to inspire children to read, illustrate and create, by giving them access to books by artists and creators who look like them. It is our commitment to raising readers who see themselves reflected in literature.”
The virtual festival runs through August 31st.
In Indiana, Ashley Thompson and her educational organization Stand for Children Indiana initiated a campaign in response to both the virus and racial injustice. To mitigate the impact of summer learning loss and call attention to racial issues, Thomas contacted local booksellers to acquire children’s books with diverse characters and age-appropriate themes. She then distributed them to families at drive-in events.

And today there was a heartening story out of New Britain, Connecticut, where two siblings, an 8-year-old girl, and her 5-year-old brother, are helping raise money to buy books with Black characters and donate them to every school in their city. The children have found great success speaking at BLM demonstrations (and selling bookmarks and necklaces with the BLM logo).

To think, it took me going to college to even hear the word intersectionality. The likelihood that 5 and 8-year-olds will be fluent in the basics of this concept—and formulate new terms to advance conversations about race—is growing. It’s one of the thoughts that keep me going this year, and a compelling reason to keep pushing for changes in the industry at every age level.