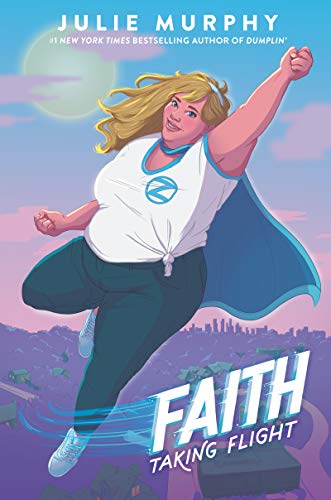 From Julie Murphy, #1 New York Times bestselling author of Dumplin’, comes the first in a two-book origin story of Faith, a groundbreaking, plus-sized superhero from the Valiant Entertainment comics.

Faith Herbert is a pretty regular teen. When she’s not hanging out with her two best friends, Matt and Ches, she’s volunteering at the local animal shelter or obsessing over the long-running teen drama The Grove.

The Psychology of Time Travel

In 1967, four female scientists worked together to build the world’s first time machine. But just as they are about to debut their creation, one of them suffers a breakdown, putting the whole project—and future of time travel—in jeopardy. To protect their invention, one member is exiled from the team—erasing her contributions from history.

Fifty years later, time travel is a big business. Twenty-something Ruby Rebello knows her beloved grandmother, Granny Bee, was one of the pioneers, though no one will tell her more. But when Bee receives a mysterious newspaper clipping from the future reporting the murder of an unidentified woman, Ruby becomes obsessed: could it be Bee? Who would want her dead? And most importantly of all: can her murder be stopped?

A chilling Japanese psychological thriller and Edgar Award finalist about four women, forever connected by one horrible day in their childhood — fifteen years later, someone wants to make sure they never forget.

When they were girls, Sae, Maki, Akiko and Yuko were tricked into leaving their friend Emily with a mysterious stranger. Then the unthinkable occurred: Emily was found murdered hours later.

The four friends were never able to describe the stranger to the police; the killer’s trail went cold. Asako, the bereaved mother, curses the surviving girls, vowing that they will be the ones to pay for her daughter’s murder . . .

Nature is out of balance in the human kingdom. The sun hasn’t shone in years, and crops are failing. Worse yet, strange and hostile creatures have begun to appear. And the people’s survival hangs in the balance.

To solve the crisis, the oracle stones are cast, and Kaede and Taisin, two seventeen-year-old girls, are picked to go on a dangerous and unheard-of journey to Tanlili, the city of the Fairy Queen. Taisin is a sage, thrumming with magic, and Kaede is of the earth, without a speck of the otherworldly. And yet the two girls’ destinies are drawn together during the mission. As members of their party succumb to unearthly attacks and fairy tricks, the two come to rely on each other and even begin to fall in love. But the Kingdom needs only one huntress to save it, and what it takes could tear Kaede and Taisin apart forever.

A world split between day and night. Two sisters who must unite it. The author of The Bone Witch kicks off an epic YA fantasy duology perfect for fans of Furyborn.

Generations of twin goddesses have long ruled Aeon—until one sister’s betrayal split their world in two. A Great Abyss now divides two realms: one cloaked in eternal night, the other scorched beneath an ever-burning sun.

While one sister rules the frozen fortress of Aranth, her twin rules the sand-locked Golden City—each with a daughter by their side. Now those young goddesses must set out on separate, equally dangerous journeys in hopes of healing their broken world. No matter the sacrifice it demands.

“A classic novel of both feminism and the Civil Rights movement” in 1960s Atlanta by the Pulitzer Prize–winning author of The Color Purple (Ms.).

As she approaches the end of her teen years, Meridian Hill has already married, divorced, and given birth to a son. She’s looking for a second chance, and at a small college outside Atlanta, Georgia, in the early 1960s, Meridian discovers the civil rights movement. So fully does the cause guide her life that she’s willing to sacrifice virtually anything to help transform the conditions of a people whose subjugation she shares.

The Psychology of Time Travel by Kate Mascarenhas for $26.99

The Never Tilting World by Rin Chupeco for $10.99

Become a crimson codex insider and get all the latest news on books in all genres and best discounts.