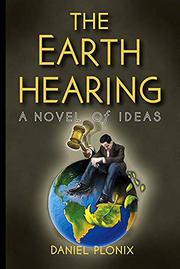 The year is 1937 and a humanlike alien named Hagar stands in the Oklahoma Panhandle. What Hagar sees is not pretty. The land, which was once the heart of the Comanche empire, is now dusty and dead. Human attempts at modernized agriculture have rendered the land all but unusable. This concerns Hagar because part of her job is to “monitor the ecological state of affairs on the various parallel planets.” If the rest of Earth is anything like Oklahoma, the earthlings (“Terraneans,” as they are called) are in deep trouble. As it turns out, this is very much the case. The story jumps to different time periods (it is set mostly in 2013 and 2015) and even other worlds, but problems are always there. Whether it is conflict in Palestine, whale hunting quotas in the Soviet Union, or modern-day, seedy practices of big pharma, humans excel at hurting both the environment and one another. For these and similar crimes, humanity may just wind up being removed from the planet altogether. Plonix’s book is billed as a novel of ideas and it certainly has a plethora. Whether Hagar is venturing through an alternate world where the Old Testament is literally true (it is a place ruled by deities, though Yahweh is the supreme one) or people are casually discussing the wars of Native Americans before the arrival of the Europeans, the dialogue tends to try to make readers think about things in different, even controversial ways. While effective, this abundance of dialogue can grow monotonous. Although in early portions, Hagar engages in some butt-kicking when necessary, as the story progresses, there is less doing and more talking. One discussion even requires a pause so the characters can eat pizza. Nevertheless, whether or not readers agree with the sentiments portrayed, they will certainly think about the ideas presented.

THE DARK THAT DWELLS BOOK REVIEW 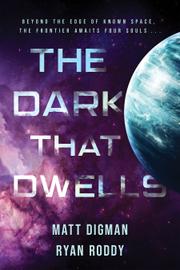 Digman and Roddy, a husband-and-wife writing team, make their debut with a robust but complicated combination of science fiction and high fantasy, in which crumbling castles and dragons and wraiths share the stage with ray guns and spaceships. It takes place in the aftermath of a traumatic, galaxy-rending war between a pantheon of gods and entities of primordial evil called the Qur Noc. Now, rival space-going human kingdoms, uneasily at peace, scheme and skirmish using faster-than-light ships and “T-Gate” transport points—alien technology that mankind doesn’t even fully comprehend. However, these struggles merely provide background as potentially cosmos-shattering events happen in secret and on off-limits or outlaw worlds. Fall Arden, a freelance Ranger with a mystical sword and an automated quiver of multifunctional arrows, is one of several relentless characters taking part in a violent quest for ancient artifacts, which include a crystalline World Shard and a glyph that can tap into forbidden, ancient power. Another quester is Sidna, an “arcanist” or sorceress who’s one of a tribe of mages that defy the widespread, violent religion of Elcos. A Darth Vader–like Elcosian named Tieger, a fanatic in powered armor, serves aboard the fearsome dreadnaught Forge, and Ban Morgan is a soldier in one of the competing empires who took the blame for an atrocity committed by a prince in his squad and wants to redeem himself. There are also space pirates, a shape-shifting robot, an alien “voidstrider,” and other players. The various members of the ensemble cross paths, often violently, on doomed starships, in pocket universes, and in death-haunted temples.

Fantasy fans will easily recognize and savor the novel’s echoes of, tributes to, and occasional quotations from the Lord of the Rings series, The Hitchhiker’s Guide to the Galaxy, the His Dark Materials books, H.P. Lovecraft’s works, TV’s Babylon 5, and, of course, all things George Lucas. However, the tale doesn’t feel as derivative as other contemporary SF–fantasy fare thanks to its narrative assurance, its ability to set up characters on a mythic scale, and its tendency to keep key details tantalizingly opaque. Hermes, a shape-shifting “artificial lifeform” of obscure origins who accompanies Fall, serves as a literal deus ex machina; he gets the protagonists out of seemingly hopeless jams, much as R2-D2 and Gandalf did in works that provided the novel’s inspiration. Some readers may wonder at the fact that major characters take incredible physical punishments and easily bounce back from grievous wounds while armies of ill-fated extras are summarily ripped asunder by bullets, blades, beams, or ravenous monsters. However, the action rarely stops, the mayhem is vividly rendered, and readers are treated to multiple plot twists and cliffhangers over the course of the book. Readers should be prepared to memorize a lot of names and Dungeons & Dragons–style esoterica, though; judging from closing pages, there may well be a sequel.