After the Wind Book Review

TOO MUCH AND NEVER ENOUGH Book Review 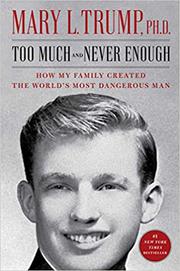 Donald Trump, writes the author early on in this scathing critique, “understands nothing about history, constitutional principles, geopolitics, diplomacy (or anything else, really.)” Her account of a night spent at the Trump International Hotel begins with her discomfort at finding her name plastered on every object in the room: “TRUMP shampoo…TRUMP shoe polish, TRUMP sewing kit, and TRUMP bathrobe….I opened the refrigerator, grabbed a split of TRUMP white wine, and poured it down my Trump throat so it could course through my Trump bloodstream and hit the pleasure center of my Trump brain.” As readers will quickly realize, there is a fate worse than having Donald J. Trump as president: being related to him. The author describes wandering around her house in shock the morning after the 2016 election. “It felt,” she writes, “as though 62,979,636 voters had chosen to turn this country into a macro version of my malignantly dysfunctional family.” Few fairy tales were ever colder and greedier than the story of Donald’s father, Fred Trump; the author, who specializes in psychopathology, prefers the technical term, “high-functioning sociopath.” Donald and his siblings were “essentially motherless” from a very early age, and they were subjected to an ongoing form of abuse summarized by the book’s title. But once Donald was tapped as his father’s favorite, he was ushered into the proverbial counting house while his siblings were left to fight for the scraps. The author’s father was repeatedly humiliated and all but disowned, and he was left to die alone. The author’s aunt “wouldn’t have been able to feed herself or her son” without Crisco cans of dimes and quarters collected from the laundry machines in the Trump apartments, sneaked to her by her mother. And it goes on, coming to a head in the unbelievable story of Fred Trump’s will. Does Mary Trump, Ph.D., have an ax to grind? Sure. So do we all.