It struck me not long ago that B-list comics villains, especially those with roots in the DC mythos, have enjoyed a renaissance since the advent of The CW’s Arrowverse. Their presence has been particularly notable on The Flash, where not only have we been treated to a revival of Mark Hamill’s Trickster and the cerebrally enhanced Gorilla Grodd, but a storyline that made King Shark, of all characters, relevant again.
With Stargirl making her debut on the CW back in May, it only seems right to give some airtime to her predecessors, and those of the Justice League, the members of the Justice Society of America (JSA). A wartime (WWII, specifically) hero group that included the original Flash (Jay Garrick) and the original Green Lantern (Alan Scott), the JSA formed after Hitler acquired the Spear of Destiny (powerful mystic weapon) and received a captive Flash and Green Lantern as gifts from one of his scientists. Summoning an army of Valkyries the two heroes were unable to defeat, Hitler moved to take Britain. Doctor Fate (weird mask, cryptic messages) sensed a disturbance in the…(insert trademark phrase here) and summoned other heroes to join in England’s defense. After turning back the enemy, those heroes met up with Garrick, and Scott and the group decided to make the arrangement permanent in defense of the home front, dubbing itself the JSA.
One of those who answered Doctor Fate’s call was… 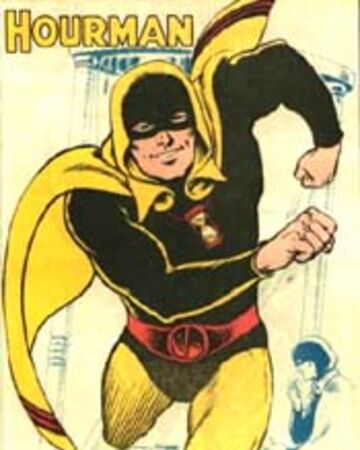 Name: Rex Tyler
Hero Alias: Hour-Man and then Hourman. Why he dropped the hyphen no one knows.

THE STACK NEWSLETTER
Sign up to The Stack to receive Book Riot Comic’s best posts, picked for you.

Special Abilities: Enhanced strength, vitality, and speed lasting one hour after a dose of “Miraclo,” a supplement Tyler created in his lab (AKA Captain America but only for an hour at a time)

First Appearance: Adventure Comics #48 (March 1940)
Creators: Ken Fitch, Bernard Bailey
Portrayed on Stargirl by Lou Ferrigno Jr. (which I found out after I made the Hulk joke)

Born and raised in Upstate New York, Tyler started with the weird early when, as a young boy, he was visited by an older version of himself. Future Rex gifted 1919 Rex with an hourglass, telling him v 2.0 would return for it in “the final hour.” So that’s a thing that happened.
Showing an early aptitude for science, Tyler majored in chemistry and landed a job researching vitamins and hormones. Like Sir Alexander Fleming before him, a series of accidents led Tyler to a useful discovery: a substance called Miraclo that enhanced the speed, endurance, and strength of test mice to metahuman levels for an hour at a time. Because scientists in comic books, be they of the good, evil, or mad variety abhor an ethics committee, Tyler decided the only viable human trials were self-trials, placed an add naming himself “Man of the Hour,” and used his ‘road-bilities and a costume he found in an abandoned shop to help those in need (such a gentleman). The costume was real yellow.  Also black but the yellow parts are eye-searing.
After 11 months (why 11? Why not a year? F&%$ if I know) of fighting the good fight and the weird fight, Hourman popped up on Doctor Fate’s radar and was summoned to defend Britain against Hitler’s actual Valkyries. He apparently made a good enough showing to be invited to join the JSA but found all the magical hocus pokery and mystical bling a little intimidating; desperate to keep up with the Speed Force and Thanagarian…Thanigarian-y stuff, Tyler jacked Miraclo to jack himself. Alas, the stronger formula led to addiction and, over time, cardiac damage (ya’ll out there hating on poor Roy Harper should be ashamed of yourselves). Though Doctor Fate was able to save Rex’s life, Hourman decided to hang up his cape and take a leave from the JSA despite being irradiated while he was dying by a type of energy that slowed his aging and I…don’t even knows what to say anymore, I’ve got nothing.
In addition to working with a Doctor, he apparently enjoyed fighting them. Some of his nemeses: Doctor Dark (liked robots), Doctor Feher (the hypnotist), Doctor Glisten (giant, bald head), Doctor Iker (occultist), and Doctor Togg (bio-engineer).
There was also a radium-armored villain named 90-Minute Man who gained the same abilities from the aforementioned that Hourman did from Miraclo but for an hour and a half. and listen, the urge to make an incredibly inappropriate joke is nearly overwhelming here, so…
At least Tyler had biochemistry to fall back on (we’ve been over this, I don’t make the rules. At least it’s consistent unlike MCU Bruce Banner who’s a physicist but also has medical doctor abilities like the are concurrent courses of study?).
Tyler did make guest appearances as an advisor and elder statesman in several issues of the Justice League and provided technical support to the JSA All-Stars when his son Rick took up the Hourman mantle.
The JSA and its members are an interesting contrast to its successor, the Justice League; though many of its members are almost, if not quite as powerful and have abilities that are mystical or alien in origin, the JSA has always been the more fallible, if more “human” and accessible group. Still, the JLA looked and continues to look, to the JSA for advice and guidance. I suppose being a god only gets you so far when you’re trying to save the world of men from itself.
Next up: Shining Knight.
[trx_socials type=”icons” size=”small” shape=”round” custom=”no” top=”inherit” bottom=”inherit” left=”inherit” right=”inherit”][/trx_socials]