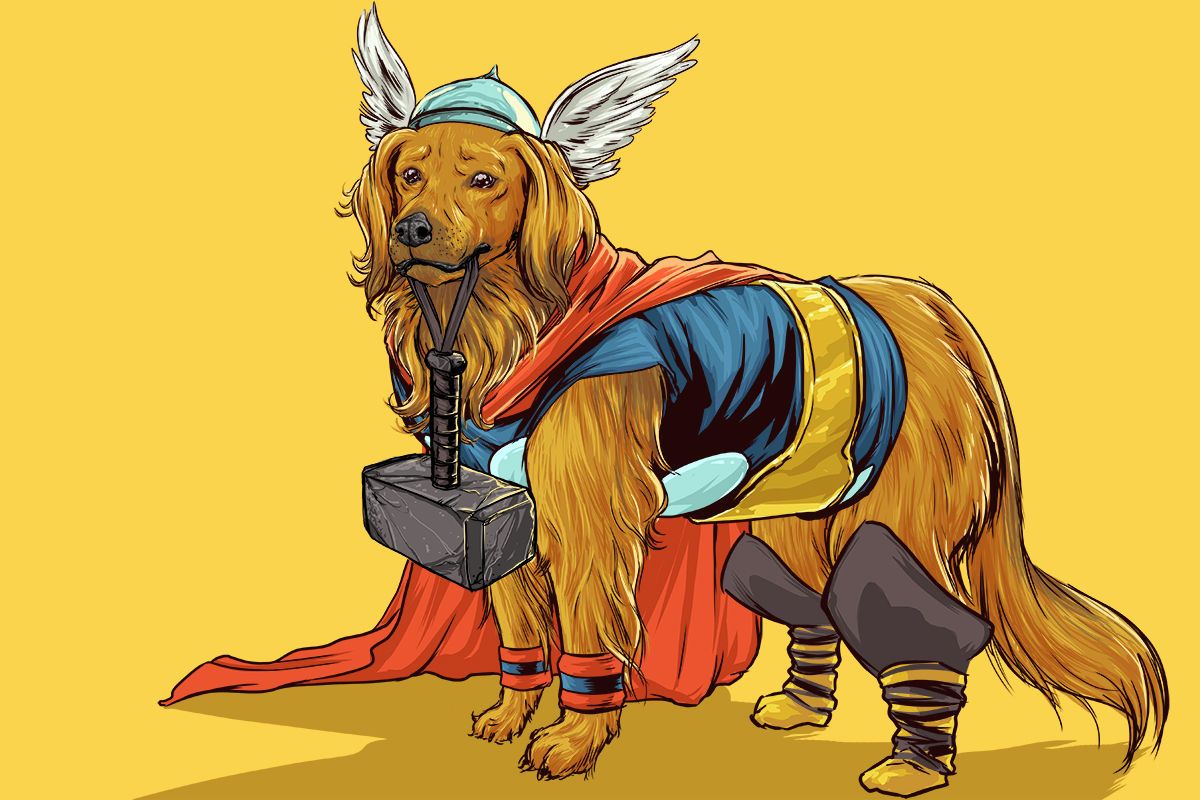 August 26 is International Dog Day, and in honor of our four-legged friends I’m here to tell you about some of the very best dogs in comics. (Just kidding, all comics dogs are good dogs.) Lots of people know about Krypto or Ace, and of course Pizza Dog is as universally beloved as his namesake, but there are so many more good puppers to love! Let’s take a look: 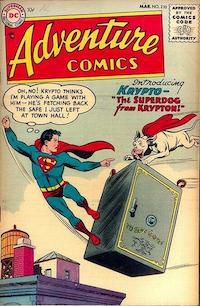 Krypto’s origins have changed many times over the decades—basically, every time Superman gets revamped, his dog does too—but his most frequently used (and simplest) backstory is that he was the El family dog back on Krypton, sent to Earth in a rocket before baby Kal-El because apparently Jor-El was the kind of man who saw no issue with shooting the family pet into space. Designed to create those “a boy and his dog” warm fuzzies, he’s most strongly associated with Superboys, belonging predominantly first to a young Clark Kent, then Clark’s teenage clone Kon-El/Conner Kent, then Clark’s son Jon, though most recently he’s been adventuring through space with Supergirl. Krypto has a very distinguished resume, with membership in both the Legion of Super-Pets and the Space Canine Patrol Agents, his own animated show in 2005, and recurring live action appearances on DC Universe’s Titans. 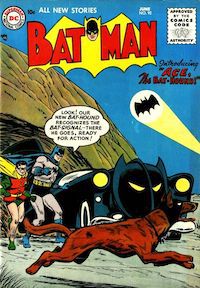 I guess Batman saw that Superman had a dog and got jealous, because literally three months later he got one of his own? In that he found a German Shepherd and put a bat mask on him because Bruce Wayne is a ridiculous human being? Technically Ace is the secret identity of Bat-Hound, so apologies to Mr. Hound for spilling his secret. He disappeared in 1964 along with other side characters like Batwoman and Bat-Girl when the Batman comics were revamped, but reappeared in the ’90s and continued to show up sporadically in various incarnations, often in a metatextual context as a “forgotten” or alternate universe character. Most recently, he was reintroduced in Rebirth as an abused guard dog initially belonging to the Joker who Bruce and Alfred rehabilitate. They do not use him to fight crime—Bruce only compounds that sort of abuse with children these days, not dogs—but they do get him a little bat mask as a joke. 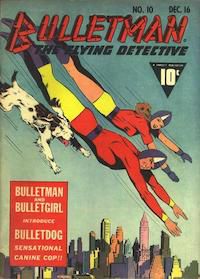 I started this list with the two most famous superheroes’ dogs, but they are not the oldest. That honor goes to the obscure Bulletman and Bulletgirl’s even more obscure dog, the creatively named Bulletdog. (Well, technically that honor probably goes to Devil, the Phantom’s dog, but technically The Phantom is a comic strip, not a book, and also Devil is a wolf and not a dog…) Bulletman, AKA Jim Barr, wears a bullet-shaped helmet to fly and fight crime alongside his wife Susan, AKA Bulletgirl. When their dog Slug bites a criminal trying to hurt Susan, Jim decides that Slug deserves a gravity-defying collar and an alias as well. Most superheroes’ dogs are larger breeds, but I love that Slug is clearly a sweet li’l spaniel! That can fly! Comics are so silly. 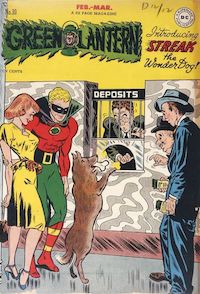 Superheroes were big sellers during World War II, but their popularity waned in the postwar years and publishers tried various experiments to bring readers back. In Green Lantern’s case, they gave him a dog. Streak was a German Shepherd whose owner was killed by gangsters; Streak attempted to avenge him and was shot, but was rescued by Green Lantern, who then adopted the ownerless dog. (We will see a very similar origin for Lucky a bit further on.) Streak proved so popular—or, uh, Green Lantern proved so unpopular in those trying postwar times—that out of the remaining eight issues of Green Lantern, three of them featured Streak on the cover, and not Green Lantern himself! He continued to have sporadic solo adventures in Sensation Comics after Green Lantern was canceled and is something of a spiritual predecessor to… 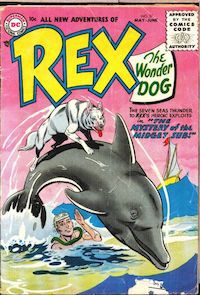 Yes, that’s right—three years before Krypto’s debut, there was a super dog with his own book! Rex is basically a canine Captain America—he was part of the Army’s K-9 Corps, where he performed so well that he was given a DC variation on super soldier serum, giving him enhanced strength, speed, and intelligence. After serving in WWII and Korea, he was taken home by an army major and proceeded to split his time between crimefighting and working as a Hollywood stunt dog, obviously. Over the 46 issues of his series he had many truly wild adventures including fighting numerous dinosaurs, befriending aliens, and repeatedly journeying to a subatomic universe. He can ride a horse and a bull and has been decorated by the French Foreign Legion. Unsurprisingly, his appearances in recent decades have been somewhat sporadic, but he’s still around (thanks to once drinking from the Fountain of Youth) and a member of the Bureau of Augmented Animals run by Detective Chimp.

Fun Fact #1: He has a brother named Billy or “Pooch” who fought alongside the Losers in World War II and received the honorary rank of Sergeant.

Fun Fact #2: Liter
ally every sentence one can say about Rex the Wonder Dog is funnier than the one before. 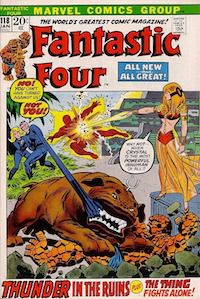 Marvel finally makes it onto the board! Lockjaw is an Inhuman, which are basically a mutated parallel evolution to humans, so I don’t know why there’s a dog but I one hundred percent don’t even care because Lockjaw is such. A good. Doggo. He is a giant bulldog who can teleport and also do miscellaneous other things, including eat any scrap metal or robots you don’t particularly feel like dealing with, and he seems to belong collectively to the Inhuman royal family—or let’s face it, they belong to him. He is a member of the Pet Avengers and could theoretically have been the first superhero dog to be seen on live action television if anyone had actually watched Inhumans. 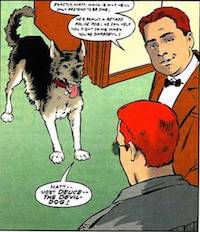 After finding out that his best friend Matt Murdock was really Daredevil, Foggy Nelson thought it would be a good idea to adopt a retired police dog to aid Matt in his crimefighting. Since that makes zero sense and Matt didn’t actually want a dog, Foggy wound up as Deuce’s owner, and the two were extremely devoted to each other, even saving each other from armed thugs, until Foggy got drunk and lost Deuce to Deadpool’s friend Weasel in a poker game. Deuce then belonged to Deadpool’s other friend Blind Al for a while before just sort of disappearing.

Fun Fact: In 1985, Marvel previewed an animated series that was never actually made called Daredevil and Lightning the Super Dog, which was supposedly dropped by ABC because of the concurrent extremely dark and violent Frank Miller run on the comics. Lightning was, like Deuce, a German Shepherd. 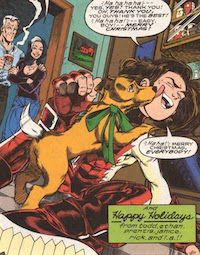 Dox is a completely normal dog, although he was the only member of Impulse’s supporting cast to recognize that Bart Allen had been replaced with his evil clone, Thaddeus Thawne. (Bart eventually came back.) When Bart briefly got magical powers, he enhanced Dox’s intelligence and gave him the ability to speak; Dox lost the latter when the magic wore off, but seems to have retained the enhanced intelligence. Sadly, he has not been seen in nearly 20 years, but the important thing is that Bart Allen is a perfect boy and deserves a dog. Brian Michael Bendis, are you listening? 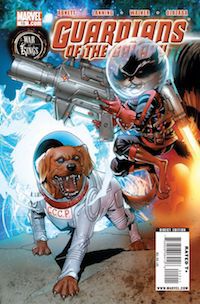 Cosmo—who is shockingly not a German shepherd—was launched into Earth’s orbit by the Soviets in the 1960s, but he drifted off and was bombarded with cosmic rays, Fantastic Four-style, which gave him enhanced intelligence, an extended lifespan, and various psionic abilities. He is the security chief of the space station Knowhere, a city located inside the severed head of a giant Celestial—kind of a space Casablanca. He is a member of the Guardians of the Galaxy (and appeared in the 2014 movie by the same name) and an ally to the Nova Corps.

Fun fact: The dog actor who played Cosmo in Guardians of the Galaxy is named Fred. Aw! 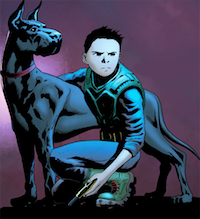 What do you do when you find out you have a 10-year-old son who has been raised as an arrogant, rage-filled killing machine who has no idea how to process his feelings except through violence, and you yourself are equally bad at processing your feelings unless your butler explains them to you? Why, get him a dog, of course! Kids love dogs! Titus is a German Shepherd/Great Dane mix (whoa, mixing it up, comics!) gifted by Bruce Wayne to his son Damian early in their relationship. Damian being Damian, he promptly names him after Shakespeare’s bloodiest play, Titus Andronicus. Titus is so devoted to his boy that when Damian’s dead body (he got better) was stolen by Glorious Godfrey and taken to Apokalips, Titus insisted on accompanying Bruce there to retrieve him.

Fun Fact #1: Titus was intended to be the New 52 incarnation of Ace, but editorial wouldn’t allow writer Peter Tomasi to use Ace’s name, hence “Titus.” Ace was then introduced in Rebirth so now the Waynes just have two dogs.

Fun Fact #2: Damian also has a cat, a cow, a bat-dragon-thing, and, in some continuities, a turkey. 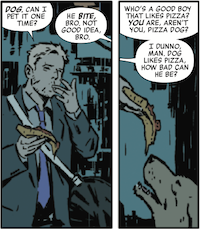 Lucky originally belonged to the leader of the Tracksuit Mafia, but after Hawkeye fed him some pizza, Lucky took Clint’s side in a fight against said Mafia. He was badly injured, but Clint got him to the vet in time to save him, and proceeded to adopt him. Clint and the other Hawkeye, Kate Bishop, share custody of Lucky, and he has been their loyal defender ever since. (But not a Defender. That’s a different thing.) Lucky has teamed up with another basically regular animal, Squirrel Girl’s roommate’s cat Mew, to defeat Taskmaster, and once famously got a whole issue from his perspective (Hawkeye #11), which won the 2014 Eisner for Best Single Issue. He is a very good dog. 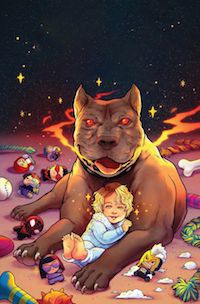 Don’t let Loki watch your pet. While attempting to invade the Asgardian underworld of Hel, he set the demonic Hel Wolf on Garm, the monstrous hound who guards the gates to Hel, as a distraction. It sort of worked, in that they had a litter of seven puppies. The All-Mothers insisted that Loki find homes for the puppies, but Thori was so vicious that the All-Mothers ordered him put down. Naturally, Loki adopted him instead. As is fitting for Loki’s dog, Thori’s allegiance has shifted multiple times, but most recently he’s been hanging out with his namesake Thor. Thori is pyrokinetic and can fly through space and follow a scent across dimensions. He can also talk, mostly about death and destruction, and, charmingly, in the same fakey Old Norse font all Asgardians talk in. Who’s a good little murder puppy? Thori is! 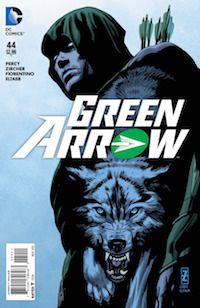 George is part Husky, part wolf, and descended from a wolf that was once healed by, um, Native American magic (yes, this story was published in 2015) so he might have magic bones? Sure. Green Arrow found him when he broke up a dog fighting ring and ended up taking George home with him. George is incredibly fluffy and devoted to Ollie and his younger sister, Emiko. Sadly, he has not been seen since Rebirth in 2016, but I chose to believe he’s been just off-panel in every subsequent issue of Green Arrow. 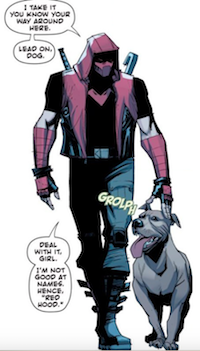 While searching for a criminal mastermind in an abandoned Mexican prison, Red Hood found a stray dog that he promptly befriended. He named her “Dog,” because apparently Damian got all the good pet-naming genes. (Yes, I know they’re not biologically related.) The dog appears to be a pit bull or pit bull mix. She hasn’t been seen in Red Hood: Outlaw for a while so I’m assuming either Damian stole her, or she’s hanging out with George. I’m just impressed/concerned that it took the comic book industry until 2019 to realize that dogs can be female.

And there you have it: 14 excellent superhero doggos! Which one is your favorite? Did I miss any? Let us know on social!